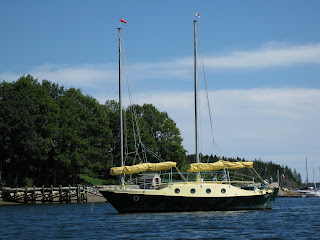 We are often asked why we choose to sail a junk rigged schooner for offshore sailing when more technologically improved sailing rigs are available today. Up until recently the response would be that we always were intrigued by the rig and simply wanted to sail one. Having been aboard a Colvin Gazelle at Marina Hemingway outside of Havana, Cuba only increased the desire to build and sail a junk rigged boat. We built a Benford Badger design and have sailed it from Canada and back on the Atlantic circuit with stops in the Azores, Portugal, Morocco, Canaries, Cape Verdes, and Caribbean before returning home to Canada directly from Jamaica. Easy Go, the name of our boat, is a junk rigged dory schooner, engineless, with auxiliary power in the form of a Chinese yuloh. Kathy and I built this boat in Canada close to Lake Erie. Previous to this boat we had sailed a Grampian 26 on the Great Lakes and as far afield as the Caribbean. The Grampian, also named Easy Go was a conventional sloop rigged boat. The best reason for sailing a junk rig became apparent during the 3200 NM nonstop 37 day passage from Port Antonio, Jamaica to Lunenburg, Nova Scotia, Canada. Port Antonio is located on the north shore of Jamaica. A choice of beating through the Windward Passage and then a downwind run in the Old Bahamas Channel or taking the old sailing route through the Yucatan Channel and riding the Gulf Stream is the decision to make. We chose the traditional downwind/current riding route along the south shore of Cuba and on north. Leaving on April 29, 2009 gave us a pleasant overnight passage to the first landfall off Cabo Cruz, Cuba where we not only passed by the great anchorage we had stayed at previously under the watchful eye of the lighthouse but were visited by a blue whale that dove under the keel at the very last moment giving us a little anxiety. Our next landfall was off Isla de Juventud, another one of our favourite places when sailing the south coast of Cuba. Our final view of Cuba was the lighthouse at Cabo San Antonio, the western most point of Cuba. Fishing was excellent with good catches of tuna.

Turning the corner inside of the major shipping lanes off this cape we headed north east in the general direction of the Dry Tortugas. While the current was in our favour it was very weak and we had an easterly wind during our passage of the Florida Straits all the way from Cabo San Antonio until we were off Key Largo in the Florida Keys. While we have experienced beating to windward for short periods of time during our last two years we had not come on a time where we would be beating day and night for the better part of a week. The strength of the junk rig in beating to windward became rapidly apparent and appreciated for its steady pull and comfortable ride as we tacked across to the Dry Tortugas on a starboard tack then switched over to a port tack until we saw the lights of Havana then back to starboard tack to head us towards Miami. On this portion of the passage we picked up our first Dorado (dolphin fish) and started our time proven salting and drying. Without a motor, electricity is not possible to provide refrigeration. We have researched and successfully utilized traditional methods of food preservation for some time and no longer desire refrigeration in any form.


The tabling on our sails was not up to par and had been giving us some problems with the seams failing on the trailing edge as a result of flutter. This was part of the design when Kathy sewed the sails. We didn't know how much tabling would be required so put on the minimum amount of only about one inch. Off Key Largo we hove to for the night and in the morning put a few stitches on a couple of panels to secure the tabling and headed north with the wind on the starboard quarter. We picked up the full force of the Gulf Stream over the next few days and rolled off 170 mile days three days running and came close for a number more. Then we experienced a North Easter in the Gulf Stream! We've been in big blows before but nothing with the intensity and longevity of this one. It started with a strong line of thunder storms out of the south west that went on for about twelve hours then the wind swung quickly to the north east and increased in strength to a F7-8 and stayed there for three days. We sailed as long as we could. The seas became very high and breaking due to the wind over current affect so we hove to on a starboard tack to take us out of the Gulf Stream towards the mainland USA. The whole affair started when we about 150 NM east of Cape Fear North Carolina and ended five days later with Easy Go off Savannah Georgia after a number of changes of tacks and damaged sails. The last two days of the blow had subsided quite a bit but it was still too rough to work on the deck to effect repairs and get under way. 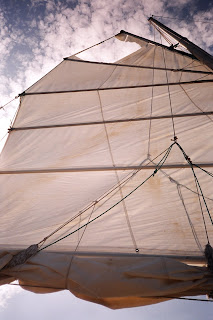 During the storm we were buried by the breaking seas three times where the water came through the closed hatches and overwhelmed the boat. We were not knocked down but simply at the mercy of nature. The hove to main sail kept us far reaching although we did lose about 80 NM during the five days. On day two of the storm, while hove to under the two top panels of the mail sail we had a tear in the top panel that eventually shredded and took way about 30 percent of that panel. The next one down also tore but did not shred. The head sail was furled but the wind did damage the portions of the sail that were exposed to flapping in the strongest part of the storm. Long tears were evident.

When the storm ended we thought it might be prudent to go into Charleston, South Carolina and make repairs but after a long assessment we decided to jury rig the sails and head to Lunenburg, Canada where we could make the necessary repairs and possibly build a new suit of sails if required.

This is the time where we really appreciated the design and strength of the junk sail. Using light rope we tied the battens together in their original configuration leaving the holes and tears as they were. Cutting out any flapping fabric was about the only thing we did to the sail cloth. With the sails up and pulling we didn't really notice much difference in the boats handling or pulling ability. None the less, it is heart breaking to look up and the tattered sails but at the same time knowing that they will keep you going for the next 1000 NM or more is satisfying. 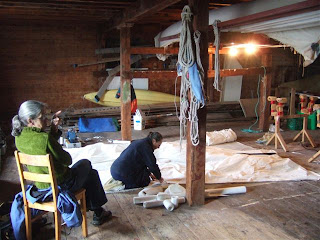 The rest of the trip was relatively uneventful. We had a few windy days, many calmer ones. More great fishing and visits from many inhabitants of the deep. Killer whales, a minke that stayed with us for three days, seals and not far out of Nova Scotia a basking shark very near as big as Easy Go decided to follow our rudder by about three feet giving us a tremendous opportunity to see this fantastic plankton eating shark up close.

We arrived in Lunenburg, Nova Scotia on the rainy morning of June 6. Tired but happy that Easy Go, the junk rigged dory schooner we had built ourselves had completed the circuit of the Atlantic and brought us home safely although she was suffering a little. Three weeks later the Kathy had rebuilt the sails, strengthening the weak parts and after another month of improvements and upgrades we are ready to head out again for more sailing adventures.